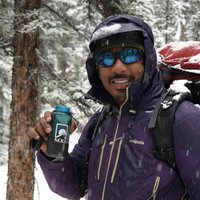 From an early age, Will has been enthusiastic about the outdoors. His first NOLS experience was on a three-day trip with NOLS East Africa in his home country of Kenya at only nine years old. In the same year, he attempted to summit Mt. Kenya's Lenana Peak (16,355 ft). Since 2002, he has been a trekking and climbing guide across alpine areas in East Africa. He also completed his Bachelor's degree in philosophy and psychology at the University of Nairobi in 2010.

Will came to NOLS as an Instructor in Training in 2011 after taking a 75-day semester in Tanzania. He has worked as a backing instructor since 2011 in East Africa and the United States. He enjoys spending time in the mountains with new people and sharing the African philosophy of UBUNTU with his students. He is enthusiastic about sharing stories and traditional knowledge from Africa, facilitating cross-cultural learning and competence, and is a passionate naturalist and philosopher. When he is not in the field with NOLS, he can be found leading safaris or expeditions to Mt. Kenya, Kilimanjaro, or other wilderness areas in East Africa.