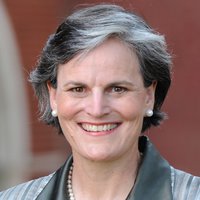 Tori Murden McClure is the President of Spalding University in Louisville, Kentucky. Tori may be best known as the first woman and first American to row solo and unassisted across the Atlantic Ocean. Also she was the first woman and first American to travel over land to the geographic South Pole skiing 750-miles from the ice-shelf to the pole. Tori has worked as chaplain of Boston City Hospital, as policy assistant to the Mayor of Louisville, director of a shelter for homeless women, and has worked with the boxer and humanitarian Muhammad Ali. Tori is an accomplished mountaineer and has completed major climbs on several continents. Tori is a graduate of Smith College. She holds a Masters in Divinity from Harvard Divinity School, a Juris Doctorate from the University of Louisville Brandeis School of Law, and a Masters of Fine Arts in Writing from Spalding University. Her book A Pearl in the Storm was published by Harper Collins. Tori and her husband, Charles, better known as “Mac,” reside in Louisville, Kentucky.