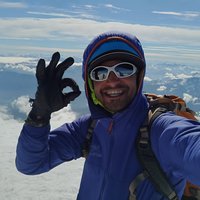 Prasad is from Mumbai, India. He has been associated with NOLS in various capacities in India and the U.S. since he was a semester student in Alaska in 2010. He has been a NOLS Expeditions Field Instructor since 2013 and NOLS Wilderness Medicine Instructor since 2016. He has also served as Evacuation Coordinator and Program Supervisor at the NOLS India and NOLS Pacific Northwest campus. Prasad has a degree in Information Technology from Mumbai University and has studied Industrial Management. Prasad was the proprietor of a plastic business before his passion for the outdoors led him to shift careers. Prasad likes exploring in all climates, teaching and experiencing various cultures. He believes it's never too late to continue learning. He has traveled to 16 countries and speaks three languages. He believes that traveling, being in touch with nature and interacting with people from different backgrounds leads to rewarding and meaningful experiences.