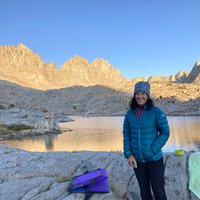 Mimi got hooked on the mountains after taking a NOLS course in the mid-1970's. She started climbing, and then worked as a NOLS field instructor for the next seven years. She climbed rock and alpine routes in the US, Canada, South America and the Himalayas. She then switched paths and became an anesthesiologist, still recreating outdoors during her free time. Her proudest accomplishment has been raising two amazing daughters. Despite numerous "type 2 fun" family adventures with their mom, they nonetheless developed a love of the outdoors, and both work as NOLS field instructors. As Mimi's anesthesiology career started to wane, she decided it was time to circle back and start teaching for NOLS again, this time as a Wilderness Medicine Instructor. Despite years of experience in both medicine and mountaineering, she is still trying to figure out how to carry a lighter pack.