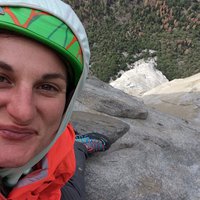 Josie grew up in Pescadero, California, a small town along the central coast, where there was plenty of space to develop an adventurous spirit. She began swimming in the ocean, exploring the woods, and clambering on boulders and trees about as soon as she could walk. At age 10, she discovered rock climbing, and it quickly began to shape the rest of her life. She began to teach climbing expeditions for NOLS in 2009 and has been traveling the globe on her own climbing adventures since 2005. After spending several years working as an EMT and technical rescue specialist for the Yosemite National Park Search & Rescue team (YOSAR), the nation’s busiest SAR team, she had honed another set of skills. Now she spends her free time teaching these skills for NOLS Wilderness Medicine in between climbing at her home crags in Yosemite.