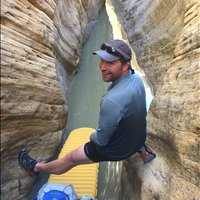 Josh hails from the rolling soybean fields and verdant suburbs around Memphis, TN. It was in this environment that Josh vowed to go West and only return home for Christmas dinners. Josh holds a BA in Public Policy and an MA in International Development. After a short career involving suits and shiny shoes (emphasis on short), Josh became a full-time field instructor for the National Outdoor Leadership School in 2002. In 2008 Josh joined the NOLS Wilderness Medicine ranks and currently devotes much of his year to teaching WFRs and WEMTs in the Rocky Mountain region. Josh lives in Lander, WY with his better half and their two dogs. He enjoys long-distance hiking, educating in (and being educated by) the outdoors, and the lyrical prose of Ed Abbey.