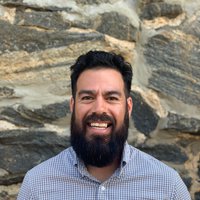 Jorge was born in the Bronx, and grew up in Connecticut. As a kid, he headed to Puerto Rico each summer, where he spent most days outside; back in the Northeast, as a high schooler, he started running cross-country – his first introduction to trails. Those early seeds of appreciation for the outdoors bloomed years later, when he moved to California. On his first Big Sur camping trip, he struggled to lug his overstuffed pack into the site, but got to feel the thrill of finding the perfect tent spot and exploring trails for fun, with a new community of friends. Within a few years in San Francisco, he had hiked countless miles and fallen in love with the feeling he got from experiencing new places, in new ways. But something was missing: The people he most wanted to share that feeling with weren’t experiencing the outdoors in the same way. That’s when Jorge found NOLS – and a new passion: increasing access to the outdoors for all. In 2018, he moved to Lander, Wyoming to work for the National Outdoor Leadership School, where he helps teens from cities around the country find their place in the outdoors.