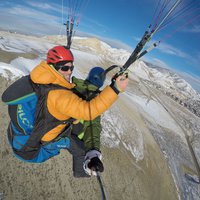 Hovey is a former Cornell University engineer and U.S. Marine officer who has been leading NOLS Expeditions and teaching Wilderness Medicine since 2005. His specialties include international NOLS work in Mexico, Thailand, Malaysia, Singapore, New Zealand, India, Norway, Sweden, Iceland, and China. In 2009, he earned the NOLS Instructor of the Year award. Hovey is also a tandem paragliding instructor and guide, as well as an accomplished mountaineer. He has volunteered with Denali climbing rangers in Alaska for the National Park Service, summited Kilimanjaro in Tanzania and Stok Kangri in India, and flown his paraglider from the top of the highest volcano in North America, Pico de Orizaba.