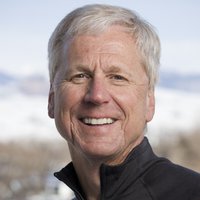 John first came to NOLS as a student on a Semester in Kenya course in 1979. He returned to the school as an instructor in 1981, and in 1984 became the director of NOLS Alaska. Prior to being named executive director, John served as the admission and marketing director and as the operations director for the school.

Under his leadership, NOLS’ financial aid program grew by more than 400 percent and the school increased enrollment to more than 25,000 students a year. The school also acquired the Wilderness Medicine Institute (now NOLS Wilderness Medicine) and started NOLS Professional Training (now NOLS Custom Education). John also oversaw the establishment of the school’s endowment, which has now grown to $39 million.

Under John’s leadership, NOLS was recognized as one of the best employers in the country by Outside magazine and The Nonprofit Times, and received the Torch Award for Ethics from the Better Business Bureau. NOLS also received awards from Backpacker Magazine and the Outdoor Industry Association for its contributions to the outdoor community. In 2012, John was recognized by President Barack Obama as a White House Champion of Change for his commitment to youth, wilderness, and leadership.

John is married to Stephanie Kessler, Director of External Relations at Wyoming Outdoor Council. They live in Lander, Wyoming, home to NOLS World Headquarters. Their three children are all NOLS graduates, and their daughter Mara is a NOLS instructor.