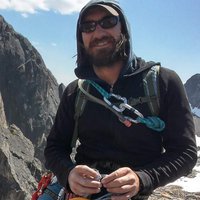 Jeremy began a life of travel and adventure at a young age, exploring the desert Southwest with his parents at age 3, living in a state park, and going on his first solo backpacking trip in the Everglades at age 15. Upon graduating from the US Naval Academy in 2004, he chose to be stationed on a ship near Seattle, Washington for the abundance of alpine rock climbing, backpacking, and mountaineering opportunities. Jeremy was transferred to San Diego in 2008, where he completed his time in the Navy and spent two years at a non-profit working in clean energy advocacy. Feeling the pull of the wilderness, he took the steps to follow his dream of a life working in the outdoors. Starting in 2013, he got certified as a Wilderness EMT and took a spring IC the following year to become a NOLS instructor. When not leading backpacking or mountaineering courses for NOLS, Jeremy can be found guiding backpacking trips in the Grand Canyon, Yellowstone, or the Pacific Northwest.