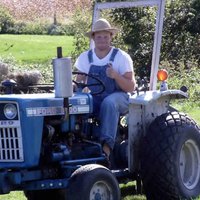 Wallace was born and raised in the corn fields of Iowa where he learned how to fix fences, build barns and generally thrown hay bales large than cows with ease. Commonly proclaimed as too wide for many things in life, this "broad as a barn" chested farm boy has trouble fitting through slot canyons, into reasonably sized shirts, and through small doorways. Life has been nothing but an adventure for this mate, as he has lived in several Patagonian countries working as a mountain guide and river guide, skied and taught elementary school in Seattle, worked as a wilderness medic in Ecuador, completed a Masters in Public Health in Iowa, and dabbled as a carpenter and bike builder on the side. In addition to working for NOLS Wilderness Medicine, he works as a professional mountain guide which takes him around the world to beautiful mountains and rivers alongside amazing people. His love for the outdoors started early as his dad took him climbing at age 2 and skiing at age 3, and he was hooked instantly. For him life is meant to be lived as an exclamation! and loves putting life into his years amongst the graces of incredible friends and family. His passion for youth and his zest for the outdoors is what brought him and the other three co-founders to bring their non-profit Beyond Adventures to fruition. Wallace loves sunrises and sunsets, a good campfire among friends, skiing in big snow, climbing tall rocks, fresh cookies with milk and driving tractors.