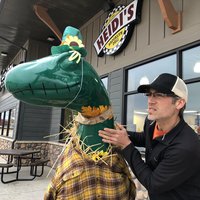 Eric is a lover of the worlds watery places from lakes to sounds to creeks and rivers. Eric's childhood was spent in the great mitten state on the shores of Lake Michigan where he developed a passion for kayaking, bodysurfing and being tumbled by freshwater waves. The sirens of the west coast called in 2009 and Eric moved to the Seattle area where he worked in various capacities at Mt Rainier National Park and on the S/V Carlyn plying the waters of Puget Sound while teaching marine science. Eric's love affair with the Pacific NW grew into leading backpacking and kayaking trips but eventually the freshwaters of Michigan called him home. In recent years Eric has been spending his time instructing paddling around West Michigan, getting schooled as a newly minted Wilderness EMT and working summer's at the North Carolina Outward Bound school.