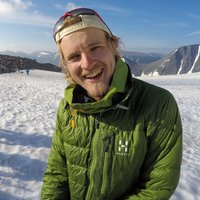 Elias Sjöberg is a nursing assistant and has been working full time in the outdoors since 2013. His first big expedition was crossing Madagascar from east to west, and his three friends together became the first Swedes to climb their highest mountain. Elias works as a field instructor for NOLS Expeditions in Scandinavia and he leads trips as a guide at Kilimanjaro, Kebnekaise (Sweden’s highest mountain) and in Morocco. He spends his wintertime as a ski patrol in a small resort in Sweden and he spends around 130 days in the field each year. He loves teaching and meeting people in the outdoors and when he have free time he loves to take his self-built RV for a spin for some adventures anywhere there is something to climb, hike, ski or paddle.