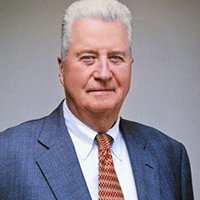 Doug, a NOLS parent, has been volunteering for NOLS since 1994 including serving on the NOLS Advisory Council. In 2002 he took his first course - horsepacking in the Wind River Mountains of Wyoming. Also, Doug has participated in NOLS alumni trips and invitational trips.

In 1964 Doug received a bachelor's degree in foreign affairs from the University of Virginia and in 1966 he earned his MBA from the Darden School. Doug has spent the bulk of his career as a venture capitalist and personal wealth investment manager. He is president and chief executive officer of HL Capital, Inc., a personal investment business in New York City, is now retired from the board of directors for Regency Centers Corporation, and is retired from the Board of MeadWestvaco Corporation.

Doug has completed four New York marathons, and he enjoys fly-fishing, bird hunting, and horseback riding. He lives with his wife, Sarah, in Pine Plains, NY. Doug and Sarah have three children and six grandchildren.