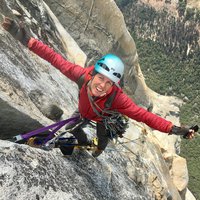 Bronwyn grew up in a suburban town bordered by the foothills of Northern California. Her childhood was filled with tree climbing, tadpole catching and mud fights, which inevitably led to a deep love for the outdoors. Bronwyn’s professional career as an outdoor educator began at UC Berkeley where she managed and taught sailing, windsurfing, sea kayaking and paddleboarding programs. After a few seasons on the water Bronwyn discovered rock climbing on the world class granite in Yosemite, Lake Tahoe, and Joshua Tree. With a desire to share her love of climbing, she began leading climbing and backpacking expeditions for NOLS in 2015. She has traveled, climbed and worked in areas such as Squamish, BC, Indian Creek, City of Rocks, and sea cliffs of Thailand. She also took a NOLS WEMT course and started work as an EMT and technical rescue specialist in Tuolumne Meadows for the Yosemite search and rescue team (YOSAR). Driven to share her medical knowledge and wilderness rescue experience, Bronwyn began teaching Wilderness Medicine courses for NOLS. Beyond climbing the occasional big wall, she loves spending time cooking wholesome recipes out of the 1961 trailer that she and her partner recently renovated.