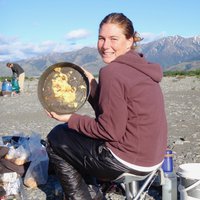 Originally a city girl from Montreal, Quebec, Bri found a love of the wilderness through summer camp and family road trips as a youngster. The incredible tripping rivers of eastern Canada solidified a life-long love of exploration by canoe. Hoping to take a break from school, and not wanting to settle into a job after completing an Environmental Science degree, Bri took a NOLS instructor course in 2005. Since then the addiction has grown, allowing her to combine passions of traveling, wilderness exploration and stewardship, as well as educating others. Bri feels fortunate to have been able to work in seven different countries on NOLS wilderness expeditions as well as in program support positions, including five years as a Program Supervisor of NOLS Yukon. After working as Interim Director at NOLS Yukon in 2013, Bri officially took on Program Manager responsibilities in 2014, and now calls Whitehorse, Yukon home. She continues to work occasional field contracts.