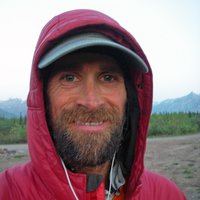 Ben Urmston has been a NOLS instructor for over a decade, leading predominantly mountaineering courses though he has also instructed backpacking, climbing, sailing, skiing, canyon and river courses. During the last six years, when not working for NOLS, Ben has been teaching Engineering, Aviation Science, Astronomy and Physics classes at a high school in western Massachusetts. Before teaching, Ben had his own arborist business, called Spacewalk Tree Service, and worked many seasons in Antarctica as a Renewable Energy Specialist and Antenna Rigger. Ben also worked at a school for the Deaf and led many wilderness trips with Deaf students and co-instructors. Ben has his instrument pilot's license, coast guard captain's license and enjoys flying and sailing expeditions in his free time. Ben has an undergraduate degree from the University of Colorado in Aerospace Engineering and a masters degree from John Hopkins University in Electrical Engineering.