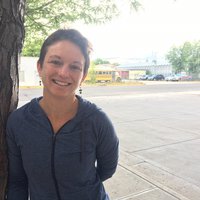 Anna Haegel is the NOLS Rocky Mountain Program Manager in Lander, WY. She got started with NOLS when she did a student semester in the Rockies in 2001. After the first canyon section, she already knew that she wanted to work for NOLS. After finishing college, Anna got an internship with NOLS Southwest in 2004. She then became the rations manager for NOLS Southwest, and then took her Instructor Course in the spring of 2015. She worked as an AFP, a program supervisor, in Field Staffing, and then took her current position as program manager. She grew up in Lomita, California in the San Francisco Bay area, and has now been living in Lander, WY for 12 years. In 2008 she led an Absaroka backpacking course, which was her favorite yet, with lots of snow and a great group of hard working students who had high outcomes due to persistence despite crossing big rivers and other obstacles. In her free time Anna loves rock climbing, working in her yard, walking her dog, and riding her new green vespa. In the field you’ll probably find her eating cheesy fried macs and quesadillas.