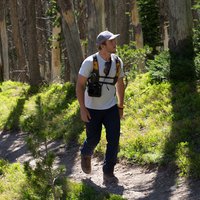 Kirk is a storyteller and ambitious rambler, who often takes the path less traveled and ends up bushwhacking 50 degree willow slopes in a tangle of fly rods, tripods, and backcountry skis. Kirk is a NOLS Himalayan Mountaineering 2013 graduate, and now spends most of his time in the woods with his camera or stitching together massive Premiere files in the back corner of the Creative department. Previously Kirk has worked on films for the Sierra Club, PBS, and his own independent media company, TOPO.

His next big plans are probably something to do with Alaska.