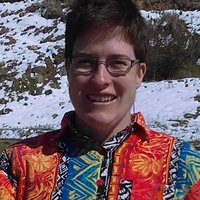 Holly Engelhart grew up in Lander, Wyoming, where her first memory of NOLS was attending a NOLS yard sale as a child. At that particular yard sale, her dad purchased Holly and her twin sister gently-used Slumberjack sleeping bags. All these years later, her Slumberjack sleeping bag is still holding together after sundry adventures tent camping, attending sleepovers, and visiting her great uncle’s cabin. Holly’s first educational encounter with NOLS occurred in the summer of 2006, when she attended a Rock and River course on a Fremont County Scholarship on her way to a B.A. in English. She loved her course, and after she received her degree, she wondered if there could be a way for her to combine writing and nature, and possibly teaching students English. In the summer of 2014, she was hired as a seasonal logistics assistant at the NOLS Rocky Mountain location. That fall, she moved to NOLS World Headquarters when an administrative assistant position came open in the Admissions Department. In addition to working in Admissions at NOLS, she tutors English at Central Wyoming College during the academic year. Two of Holly’s memorable adventures included experiencing the gorgeous desert terrain and scorching-hot days and chilly nights of Canyonlands National Park in the fall of 2015, and the verdant and slightly-damp coastal rainforests of Olympic National Park in the fall of 2016. Holly currently lives in Lander with her husband, Alex, and a sourdough starter named Hollex. Her Slumberjack sleeping bag is in the spare room of the apartment with Holly’s camping gear, waiting for her next outdoor adventure.