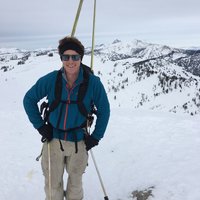 Dan is a Massachusetts native who spent a month on a NOLS course on Canada’s Baffin Island in 2006. After two summers working on a ranch in Wyoming, he fell in love with the mountains and open spaces, and made the west his home. Dan spent six years in Jackson, Wyoming, skiing, hiking, and raft guiding, before leaving for a year of backpacking through South America. He made his way back to Jackson before moving to Lander in 2016 to join the NOLS Development team as the foundation relations coordinator. He’s excited to learn to climb and return to fishing in the rugged Wind River Range.